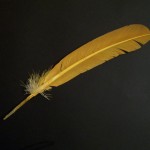 The morning began with screaming. There was a war going on, but this wasn’t the front. How were they to know this morning would be less than peaceful?

Tyrel fumbled her sword as she swung off the bed. Only being half trained had its drawbacks. Her hooves joined the general clatter around her as the wooden barracks began to shake with a sound like thunder. Warriors were heeding the call.

Lighting in the room suggested to Tyrel that it was entirely too early to be awake which explained why she was stumbling on her way through the door. Organized chaos sucked her into the double line of soldiers pouring through the hall. Tyrel ricocheted off a few disgruntled classmates before falling into rhythm. Beside her, Bain was fully liveried and eyeing her unarmored self derisively. Only his dripping hair suggested that he’d been less than ready and waiting for this alarm.  As the trotting column passed an adjoining hall a cross breeze wafted cedar from his mane to Tyrel’s face. Tyrel snickered. Yup. He’d been in the showers.

Bain glared at Tyrel as they rounded the final turn to the great room. She snickered at him again as the two columns split to fan out around the door on the opposite side. Several students were panting heavily in full armor. Tyrel wondered briefly why they were all facing this particular door instead of one of the other six. Then she realized there were several other students eyeing her sideways. She appeared to be the only one present with no armor whatsoever. She gave an exaggerated shrug and rolled her eyes.

A faint rattling and a few coughs broke the silence as the ranks awaited attack or orders. Tyrel glanced sideways. Her comrade hadn’t managed to get all his armor straps buckled and his nervous trembling was jarring the plates.

“Crimson, Brutus. Of course it’s not a troll. We’re only in our third year.”

The door slammed open and a serving nag rushed through. She skirted the room, hugging the walls as a shrieking wail echoed after her and caused the students to wince. A stately aristocratic woman emerged at a halting pace, alternately tearing at her mane and her heavily ornamented dress.

Tyrel eyed Brutus with a sideways glance. Someone behind them shushed him. The whites of Tyrel’s eyes began to show.

The dam dropped to her knees, her bright auburn tail wisping over the floor and the folds of her dress as she sank completely prone under the weight of her distress. Behind her another regal figure emerged, his majestic presence flanked by a standard bearer and a  personal guard. The student ranks saluted him, crashing weapons and armored gauntlets against shields precisely twice. Tyrel, with nothing to crash her sword against, stood solid, nervously glancing between the dam and the Region General.

The General glared contemptuously down at the keening dam. His teeth bared in a wicked sneer.

The dam tightened her fists in her mane, pulling her head to the floor until her forehead was pressed against it. Miserable sobs still leaked through her arms.

Two more guards emerged from the passage wearing the golden armor of the Royal Guard. They took up positions on either side of the General, their sneers menacing as they viewed the dam and stared into the ranks.

“General Jodoc has fallen to his own hand. He has disgraced his family and dishonored the Crimson. So shall his name be stricken from the record.”

The dam’s shriek pierced the eardrums of all but Tyrel. The General impatiently kicked her.

He motioned to the Royal Guards who advanced impatiently to her. As one held her struggling wings the other stripped away her crimson shoulder sash of privilege.

The dam’s passion crumbled and she sank to the floor again to lay there as though slain. Her sobbing subsided to a childish mantra of denial.

Those standing closest to Tyrel took one step away from her. Those standing between her and the Royal Guard parted to leave a path. With wolfish sneers they strode to her, not caring who they crashed into on the way. The path widened as students shifted to avoid contact with their slightly unfurled armored wings. Tyrel schooled her shock into a glare fixated on the scene before her. The guards arrogantly entered her battle zone and pressed forward until they were firmly planted in her personal space. Tyrel’s wings briefly stirred, but that was all. One of the guards snaked his face mere inches from her own. Tyrel humored him, refocusing on his eyes, and raised an eyebrow.

The guard increased his wicked grin as he slowly reached up to Tyrel’s chain link collar and fingered the golden medal of familial privilege that represented her brother, Jodoc. Tyrel refocused on the far wall as he viciously yanked the pendant from its ring. A throaty chuckle escaped him as he purposely crashed his armored wing into her while striding to the exit, his companion following suit.

Two more cacophonous crashes saluted the Region General and his entourage as they made their stately exit. Then a sergeant somewhere called the signal for a fully formed exit. As though she was surrounded by an invisible shield of force, the lines of students actively avoided Tyrel as they passed, most too afraid to even look at her. In the space of two minutes the room was cleared of all but Tyrel and the dam.

As though sensing they were alone, the dam raised her head to focus on her only daughter. She reached her hand out slowly to the stolid figure across the room and choked out a single word,

Tyrel maintained her focus on the far wall, the strain of emotion finally showing in her forehead and around her eyes. For a moment she stood frozen, then only her eyes moved to rest on her mother. For the eternity of two measured seconds they rested there. Then Tyrel smartly spun on her hoof and strode from the room as well.

4 thoughts on “It Begins”