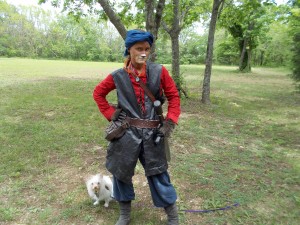 So what better way could there possibly be to spend your Memorial Day weekend than gaming in someone else’s chapter? So that’s exactly what we did. Dustin and I packed up the dog and a short list of gear and we headed out to Tecumseh, KS to play The Edge of the Wilds with Heroic Central. It was a really interesting experience as this game capitalizes on a tribal element that you don’t usually see in high fantasy games. And there were ticks. Lots of ticks.

So while I was up there I was amazed by the youthfulness of the Central player base and it got me to thinking. When you’re young you really don’t have a lot of cash to throw at your costumes. The above costume is roughly as follows:

You show that number to a high schooler and they’re going to explode with OMGs. This is just the price for the costume. it doesn’t include the price of the event, the Heroic membership fee that gets you insurance during the event as well as other extremely helpful doodads or the price of food during the event.

Now I’m really going to blow your mind. My costume was EXTREMELY inexpensive for the look I achieved. It could have been more inexpensive, however I hadn’t quite yet discovered the local thrift shops when I purchased the red shirt and the pants… and if I was able to sacrifice a stuffed animal for the fur. *shudder* I just can’t do it. It looks at me while I’m trying to rip the seams and makes me want to cry. Velveteen rabbit, anyone?

Now lets make it more accessible to the regular human being. My red shirt, blue pants, shoulder bag and boots were all purchased over a year ago for another character. They were just sitting around my house. My belt and belt pouch were also purchased for yet another character and were just sitting around my house. The turban is a length of fabric I purchased 10 years ago as a makeshift table cloth. The glove pieces under the fur on my hands were originally skeleton hands from a ruined Halloween costume we’d purchased to make packets out of. I paint as a hobby, so all the paint and brushes were sitting around my house. The black leather armor is a leather jacket my husband found months ago and picked up because it was stupid cheap at a thrift store and he figured we’d use it eventually for the leather in it.

For this specific character, I spent $15 and a reasonable amount of time for a pretty kick ass costume. Most high schoolers can scrounge up $15. If you don’t do something that requires the unique foundation/paint mix that I use, you could spend less than $10. Here’s how.

1. Check your closet, your mom and dad’s closets, your grandparent’s closets, aunts, uncles, cousins, siblings, best friends, garage sales, thrift stores, consignment shops, and talk to anyone you know that’s been doing costuming for a while. There’s likely a bunch of things just lying around that you can repurpose into your costume. Always start with the stuff that’s free to see if there’s something that might work. Another great way to save money is to hit costume shops during the off season or check into those “only open for Halloween” shops a week or so after Halloween is over and they’re trying to clear out their inventory before they close. 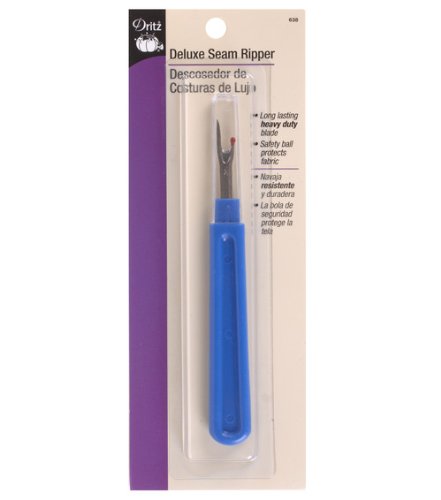 Thanks to Amazon.com for the picture

This is a seam ripper and if you’re trying to save money on costuming, it’s your best friend. My leather armor was a leather jacket that came to my knees. I used a seam ripper to take everything off it but the vest portion that I wanted. To avoid overheating issues I removed the lining (also with a seam ripper). Then I put it on and stuck a belt over it to hold it closed. The end. Easy cheesey. Just don’t stab yourself with the ripper. It hurts. A lot.

3. Learn to view every sheet, curtain, tablecloth, old couch or cushy chair, prom dress, coctail dress, ruined leather anything, blanket and comforter as a potential costume. My husband’s shiny mage shirt was a women’s plus sized dress shirt before I took a seam ripper and a sewing machine to it. His one shouldered monk robe was a women’s satin bathrobe with lace on it.

4. Learn how to sew on a button. It’s inexpensive, relatively easy to learn to do well and incredibly necessary when you’re learning to reclaim items into costumes.

5. Reassure yourself as you look at this weird jumble of stuff you’ve collected that costumes evolve over time. As interactive theater players or larpers, we have the privilege of wearing this outfit more than once and there’s nothing wrong with changing it up as you go. In fact, this is completely normal.

There’s the basics. As I continue blogging with my costuming how-to stuff I’ll be including ways to skimp on the cost while still providing a really amazing looking result. Stay tuned!

*please note the boffer weapon I carry is not included in this as I consider weapons/shields a separate crafting category. If you’re curious, my boffer is worth about $15-20? I didn’t build it so I’m not sure exactly.

One thought on “Inexpensive costuming”