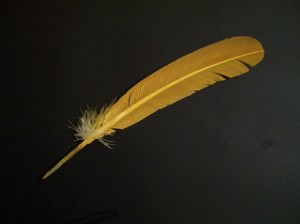 The rumbling monotone of breakfast voices carried an ominous tension as dragoons consulted their squadmates and discussed the ramifications of the loss of General Jodoc. Buzzing voices fell silent as Tyrel neared the entrance to the mess hall and eyes wandered the walls in an effort to see anything but her form. Tyrel snorted and rolled her eyes, pushing her way through the crowded door frame and switching her tail in annoyance. An aura of silence seemed to emit from her as effectively as though she’d inadvertently cast a spell. The more bold among them stared directly at her as though challenging her very existence.

Tyrel ignored the attention or pointed lack of it and entered the feed line midway, sighing. It was going to be a rough day and she needed coffee. A flicker in her peripheral vision caused her to cock an ear toward the movement as she carefully resisted the urge to turn her entire head. Two looming dragoons approached with the flowing cloaks granted to sixth years, marking them as nearly graduated. Their leather uniforms classed them as officers in training and their narrow faces marked them as upper class. A brief glance in their direction confirmed Tyrel’s suspicion as she caught sight of their much-coveted sharply angled legs: aristocrats. The scent of fir became overwhelming as they stopped inside Tyrel’s battle zone and stared at her expectantly.

Tyrel sighed and ignored them. Claudius and Blaze had bullied her since her first day here three years ago. She had no expectation that today would be any different. Other dragoons began to shift nervously away from the confrontation.

“You’re out of line, Ama,” Claudius declared far more loudly than necessary. All sound immediately ceased as dragoons and service staff alike froze to await the outcome. Tyrel continued to ignore the pair, staring straight ahead as though it was just another day. Claudius inserted himself directly in front of Tyrel, close enough that she could see no higher than the center of his chest without tilting her head back at a ridiculous angle. The smell of fir began to burn her sinuses as Blaze boxed her from the side.

Claudius hooked two fingers under Tyrel’s collar and shoved her chin up with his thumb, forcing her to stare him in the eye while stretching her throat to its full extension.

Tyrel sighed in annoyance. “Yes, I heard you. Dam’s name instead of sire. Very clever, sir.”

Claudius’ sigil finger flicked the broken link where Jodoc’s medal used to hang. “What do we have here? Broken link to your collar? Lose a rank in the yard scrabbling around with the stable boys, perhaps?” Claudius sneered, lowering his nearly equine face to the point of almost touching Tyrel’s distinctly humanesque nose. “You don’t belong here.”

Tyrel rolled her eyes over to the service staff on the other side of the counter. Without meeting her eyes, the nag nodded slightly in affirmation. Claudius’ sneer deepened to a grin as he shoved Tyrel backwards into Blaze. Blaze turned his shoulder away as though mere contact with her would taint him and she gracelessly staggered to freedom. A brief glance at those around her confirmed that she would receive no assistance here. Dropping her eyes to the floor she wove through the crowd into the tables beyond the dispensary. Murmurs resumed in her wake.

After pausing for a moment on the edge of the sea of tables, Tyrel unwittingly fingered the broken link at her neck then wove her way resolutely to the tables furthest from the door. Her wings stirred in agitation occasionally, realigning the black bars that marked her russet feathers. She gracefully threw a leg over the bench to an empty table and sat with her back to the room. Although she was technically where she belonged according to city hierarchy, the stable hands, service workers and dragoons of low rank at adjoining tables swiftly gathered their trays and awkwardly moved away. Overcome by the depressing circle of emptiness, Tyrel threw her other leg over the bench and covered her face in her hands. Leaning on her elbows she tried to shut out the world.

Her momentary relief shattered at the sound of a tray scraping across the table. Jerking her head from her hands she glared warily at the small group of dragoons that were purposefully joining her table. Brutus met her eyes, his thin lips jumping into a half smile as he lowered himself onto the bench across from her.

“No. No! Guys, don’t do this!” Tyrel shook her head in agitation and began shoving their trays away from her. “You’re only in third year. Don’t make things harder for yourselves.”

“Squad looks after its own.” Grasca grunted as he lowered his solid bulk to the bench on Tyrel’s left. “You’re still a squadmate.” Tyrel stared at him as he tore into a rotisserie chicken like a predator. The sound of a tray sliding in front of her caused her to tear her eyes from the spectacle, snapping her head to her right as a palomino dragoon threw a hoof over the bench and straddled it, facing her.

“Absolutely not!” Tyrel pushed against the warmth of his leather uniform. “You will not risk your station or your upcoming promotion because of me!” For the first time that day, panic began to surge through Tyrel’s limbs, causing her hands to shake as she continued trying to push away her larger companion. He calmly set a second tray on the table in front of him, then gathered both her hands from his chest, easily forcing them away from him and back toward the table.

Tyrel gave up her shoving, aware from previous experiences this was a contest she was incapable of winning. “I am not kidding. In two weeks you’ll take the cloak and be a Senary. Thane, please don’t do this.”

Thane flicked an ear and turned his body toward his food. “I’ll be offered the cloak at the end of the season, just like all the other Quins. I’ve been here five years and have no intention of rushing into my sixth.” He stabbed a pick expertly into his greens and began to eat with it. Tyrel stared at him, then looked around the table at the rest of her squad. Aside from being far more quiet than normal, this could have been any other day judging by the way they were devouring their breakfast.

Tyrel felt the back of Thane’s bracer nudge her shoulder. His left hand gestured toward her tray.

“Eat,” he repeated. Tyrel stared at him, the shock of her morning conflicting with the normalcy of the moment. Thane swallowed and turned his full attention to her, lowering his voice so only they could hear. “Eat, Tyrel.” His sea colored eyes held her gaze for a moment, then he returned to eating.

Everything emptied from Tyrel’s mind and she automatically did as she was told. It was as though the world had suddenly continued to go on without her consciousness. She felt her hand grasp her own pick and food enter her mouth. She smelled the wafts of the chicken Grasca had nearly finished devouring and the pungent scent of spinach as it entered her mouth. She heard her squad murmuring to one another about the events of the day. The taste of dandelion greens mingled with the spinach in her mouth as she cleared her plate without looking at it. She even noticed the small group of serving staff that chose seats at the far side of a nearby table and proceeded to make fools of themselves staring at Thane and giggling.

Tyrel glanced at Thane to see if he’d noticed them only to realize that he was watching her. This time when their eyes met, her detachment collapsed like a wall. Something was wrong. Something was very, very wrong. She couldn’t breathe. Her senses flooded with voices and colors and the smell of food and the sound of teeth tearing flesh and the taste of metal in her mouth. She surged to her feet, stumbling as she tried to maneuver over the bench and thread her way through tables that had never seemed too close together before. Her wings caught against unsuspecting dragoons as they sagged against their leather restraints. Service staff sprawled in the wake of her mad dash to freedom.

Her flight through the well ordered paths outside left a similar aisle of destruction as she blindly shoved every impediment to the side. Angry shouts and the menacing rattle of plate armor melted into the high pitched chinging of chain mail and the insistent ringing of a smith’s hammer. The crashing of a half-finished suit of armor into a rack of swords added to the cacophony, but nothing was loud enough to drown out the memory of her dam’s shrieks as the full realization of the morning’s events blinded her in a brilliant and painful flash of clarity. Jodoc was dead. He had died at his own hand. Jodoc had killed himself. Her brother had killed himself.

Tyrel smacked full force into the stone wall behind the forge. Her body rebounded with a vengeance, legs splaying at awkward angles as her training fought to keep her on her hooves. Blood began pouring from her face. She twitched her head in confusion, then doubled over and wretched. Heaving sobs clawed their way from her core, collapsing her body to the ground in a helpless fit of spasms as her body continued trying to regurgitate long after her breakfast was emptied. Tears mingled with the blood on her face, her mane tangling into it and creating a sticky mess.

Heavily muscled arms swiftly collected Tyrel from the alley floor, pulling her into the smell of leather, teakwood and some foreign spice. Silver mane had escaped its leather tie and spilled into the tear streaked mess on her face, mingling with her own auburn snarls. Strong fingers gently disentangled her mane, brushing it from the mess on her face before guiding her into the curve of his neck. For a moment she fought the embrace and tried valiantly to stifle the sobs before collapsing from the effort. The slow and steady rhythm of a gentle rocking entwined with the steady stroking of her hair, creating a momentary sanctuary. Tyrel abandoned her last shreds of dignity for grief.

The sun streaked, then dominated the horizon as the soothing sway continued. Tyrel wept herself mercifully senseless, wholly unaware of Thane’s tears falling to blend with her own.

This is Part II in a series.
For Part I: It Begins